Heart of Darkness: The context of violence in Northeast Delhi, India’s most densely populated distri

At Chand Bagh, one of the neighbourhoods that witnessed rioting.

An Express Research Group Report: India’s most densely populated district, with the Capital’s lowest number of banks. From its small coaching centres to its little businesses, its open drains to its Metro line, its mixed population to the recent polarisation, what frames the Northeast Delhi violence, leaving 42 dead?

LAST WEEK in Delhi, as homes and shops were burnt down and gunshots rang through crowded lanes, a part of the nation’s Capital was thrust into the nation’s consciousness — Northeast Delhi, India’s most densely populated district, one of its poorest, holding the highest Muslim population among Delhi’s nine Census districts and the least number of its bank branches.

The 2011 Census calculated 22.42 lakh residents packed within a 62 sq km space in Northeast Delhi. This density, of 36,155 persons per sq km, makes it thrice as crowded as the average for the National Capital Territory of Delhi and almost double suburban Mumbai’s.

But this is also a “new” and “young” Delhi, with none of the history and grandeur that the Shahjahanabad walled city or the Lutyens Bungalow Zone evoke. Half a century ago, the 1961 Census had put Northeast Delhi’s population at a mere 38,155 or a 1.4% of the state’s total. Even in 1981, it had only 4.87 lakh people, the lowest for any district of the state, barring the 1.44 lakh residing in the exclusive babu-neta enclave of New Delhi.

The district has three main tehsils: Seelampur, Seemapuri and Shahdara (which has now been made a separate district). While more than 85% of its population lives in the first two, they have essentially grown around Shahdara which, at one point in time, was envisaged as an industrial area. That promise did not particularly materialise: According to Delhi government data, the Jhilmil Tahirpur complex near Shahdara houses just 33 industrial sheds, compared to the 437 in Okhla (in South Delhi), 177 on Rohtak Road (West Delhi), and 103 in Wazirpur and 90 on Lawrence Road (Northwest Delhi). More recent are the industrial complexes at Narela and Bawana, which are in North and Northwest Delhi and have emerged as much bigger hubs. 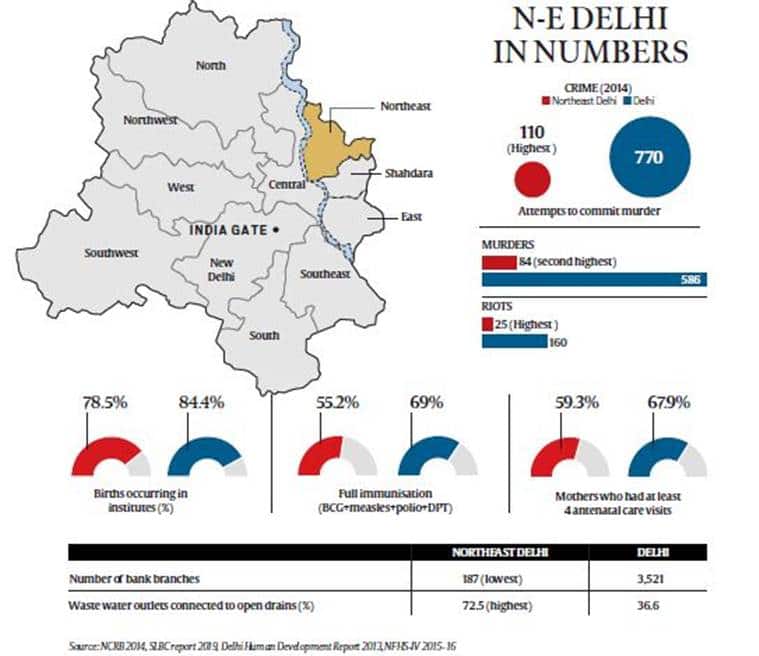 Nor is Northeast Delhi home to any major wholesale market of the Capital like Azadpur (for fruits and vegetables), Bhagirath Palace (electrical goods), Sadar Bazaar (household items), Khari Baoli (spices) and Chawri Bazar (paper, brass and copper), that are all in North Delhi; or Kirti Nagar (furniture) in West Delhi and Gandhi Nagar (readymade garments) in East Delhi.

With no large-scale manufacturing or trading centres, Northeast Delhi’s economic profile largely comprises small unorganised units. These are mostly engaged in making injection moulded/extruded plastic products such as bags, bottles, buckets and pipes. The labour force here is predominantly migrant. Bound by the Yamuna on the west and Uttar Pradesh’s Ghaziabad on the east, the district has quite naturally attracted people from other states. The 2011 Census showed that out of its 22.42 lakh population, 8.23 lakh were born outside the state. The migrant stock would be larger if one were to also take into account their children born in Delhi.

The riots were preceded by a sit-in at Jafrabad Metro Station beginning February, followed by a speech by BJP leader Kapil Mishra the next day. (Express photo: Praveen Khanna)

Equally significant is the ethnic profile: The 22.42 lakh residents of Northeast Delhi in 2011 included 6.58 lakh Muslims (29.3%) and 3.74 lakh Dalits (16.7%) . While the share of Muslims was higher at 33.4% in Central Delhi, which also houses the old Walled City area, their absolute numbers were only 1.94 lakh there. Of Delhi’s overall Muslim population, 30.5% were in Northeast Delhi, the most numbers of the community in any district of the state.

A good indicator of the underdeveloped and small-scale nature of economic activity in Northeast Delhi is data from the Delhi government’s Business Register for 2015. Out of its total 30,521 “traced and working enterprises”, more than half — 17,594 — were shops and establishments employing an average of 3.5 persons. The district had 218 “factories”, which were just 8% of the total 2,725 for the state. Even these 218 factories had 9.5 employees on an average.

“Our district has limited land. So, the units that started off in one-two rooms remained small. Meanwhile, other areas such as the Okhla industrial estate started coming up and the factories there could expand more and faster,” says Narender Nath, a former Congress MLA from Shahdara. The general lack of space, along with waves of migrants, also meant a proliferation of unauthorised colonies. Northeast Delhi has 174 of them — those that came up without the Delhi Development Authority’s (DDA) Master Plan regulations. In November, the Narendra Modi government enacted a law in Parliament paving the way for grant of ownership rights to residents of all unauthorised colonies in Delhi.

The 2011 Census figures show 72.5% of households in Northeast Delhi discharging wastewater into open drains, the worst for any district, with the state average of 36.6%. According to the National Family Health Survey of 2015-16, the district also lagged behind the Delhi average for the proportion of institutional deliveries (78.5% versus 84.4%), full immunisation (55.2% versus 68.8%) and mothers having at least four antenatal visits (59.3% versus 67.9%). Finally, a revealing number on the purchasing power of residents: Northeast Delhi does not have a single Apple Store (Delhi has 63 in all) and only three out of the state’s 93 Domino Pizza outlets. The only area where the district, perhaps, stole a march on the rest of Delhi was in Metro rail connectivity. On December 24, 2002, the first 8.5-km section of the Delhi Metro was inaugurated. That one connected Shahdara to Tis Hazari and passed through three other North Delhi stations: Welcome, Seelampur and Shastri Park.

Last week, it was under this stretch of the Metro that the clash, which led to one of the worst riots Delhi has witnessed, first erupted.

clusters in the 15 state to see strict lockdown

Mahavir Jayanti 2020: Date, History and Significance Behind the Event

Is Hydroxychloroquine The Cure For Coronavirus? Global Scramble For Tablets Suggests so